Have You Ever Heard Anything So Outragous!? 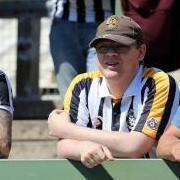 By weymouthPIE,
August 24, 2013 in The Broken Wheelbarrow