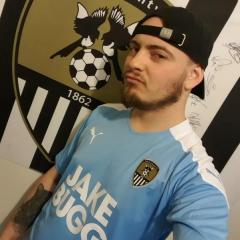 This is an article basically to give a shout out to one of Notts County's most consistent performers who doesn’t get much praise on here.

When he first arrived here I wrote him off as being too small and lightweight for the physicality of the national league but how wrong could I be?

What he lacks in size he more than makes up in passion and fight. Dion never shies away from a battle and stands up to players much bigger than him. He flies into tackles winning the ball and making sure the opposition player knows he’s there. DKE always puts his body on the line for the cause.

He knocks the ball around nicely too as part of starting our moves out from the back, something we do well as team – each player plays their part in a lot of the goals we score as a team.

Last season he had a success rate of 58.06% in offensive duels. 65% successful dribbles. 75.80% pass success. So going forward he is a great carrier of the ball – which although he doesn’t get a great deal of assists he still plays a part in our transition from defence to attack.

Let’s talk about the main part of his role in the team defending – he does well at standing players up and stopping crossers coming in our box. I do find it bizarre that he ends up marking the biggest players for set pieces such as Chesterfield's Denton but most of the time he does somehow manage to get the better of them.

This season he has taken his opportunity with both hands, he has almost reached his minutes from last term in only 14 games into the campaign and I wouldn’t be surprised to see him in with a shout for player of the season come the end of the campaign.

The fact he can play on either side of the pitch is another welcome bonus. He’s a player that embodies what Neal Ardley typically looks for, a player comfortable with the ball, a player that can play in more than one position/system, a player that will scrap for the cause. At 24 he has plenty of time to grow and hopefully reach higher levels in the football pyramid, hopefully with us.

What more do I want to see from DKE? Maybe chip in with a goal/assist or two. I’d to see him just have a go, take a shot every now and then, you never know what might happen.