ARLukomski's Match Vlog: Notts County, Wycombe Wanderers not a game for the neutrals 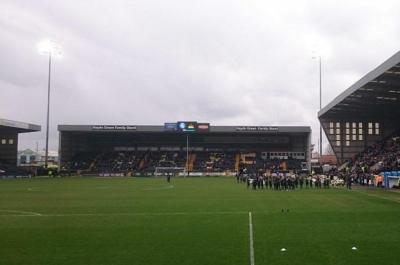 Notts County missed out on the chance to gain ground on the top three in League Two as they were held to a goalless draw by Wycombe Wanderers in Good Friday's match at Meadow Lane.

The Chairboys came to NG2 very much intent on leaving with a point and the Magpies could not break their defence down in an uninspiring, rain-sodden encounter.

County had the better of the chances in the first half with Shola Ameobi striking a post following a Terry Hawkridge cross.

Kevin Nolan was then sent to the stands as he vented his anger after Ameobi was hauled down in the penalty area by Adam El-Abd, but referee Ben Toner ruled there was no foul.

Both sides continued to trade blows in the second half but, with Notts having little end product and Wycombe shutting up shop, the end result was a stalemate.

Pride of Nottingham vlogger ARLukomski recorded his matchday experience at the San Sirrel and shared his thoughts before, during and after the match.