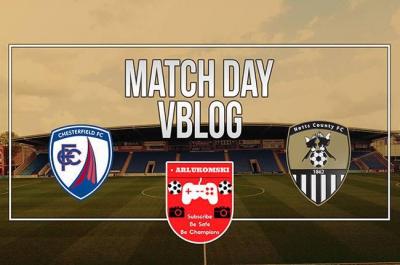 Notts County were humbled in front of the television cameras as League Two strugglers Chesterfield ran out 3-1 winners in Sunday's encounter at the Proact Stadium.

The hosts took the lead on 16 minutes Andy Kellett's corner was touched on by Drew Talbot and Sid Nelson chested the ball past Magpies goalkeeper Adam Collin from point-blank range.

Elliott Hewitt then missed a sitter before the Spireites doubled their lead through a poor clearance that was rifled home by Zavon Hines.

Notts huffed and puffed and laboured throughout the early afternoon but they put themselves within a goal of getting something from the game thanks to Dan Jones's free kick.

Nine minutes of stoppage time seemed to herald a potential comeback for the Magpies but all that happened was Chesterfield restoring their two-goal lead after Matt Tootle gave away a penalty and Kristian Dennis converted.

Pride of Nottingham vlogger ARLukomski recorded his matchday experience in Derbyshire and shared his thoughts before, during and after the terrible match.