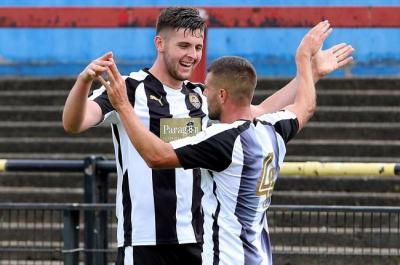 Here is what the players themselves have said about their move to Meadow Lane, as well as some thoughts by Magpies manager Kevin Nolan.

"I am very happy. This is a big opportunity for me and I can't wait to be out there on the pitch.

"Kevin Nolan is a big name. I am happy to be able to meet him and work for him."

"Mark Crossley had a tip-off about Branislav from one of his contacts so we had a good look at footage of him before bringing him in.

"We think he's going to be another good addition. He has demonstrated a first-class attitude and has all the attributes.

"We have two goalkeepers in now to push Adam Collin for the starting jersey because they all want to be number one.

"It will be an interesting battle over the course of the season."

"I was working as a civil engineer but this was an opportunity I could not turn down. My manager is a football fan and was very supportive of me following my dream.

"It's a big jump and the quality is completely different to what I'm used to but I feel I have settled in well and performed on the training ground.

"I never thought this would happen but I am glad it's sorted now. The club is moving forward and it's good to be part of it.

"The manager has told me to keep working as hard as I can to show what I've got."

"Pierce is a great kid and we are absolutely delighted to have him here.

"There is nobody more deserving of a contract - he has been fantastic since he walked through the door.

"We played against him in a friendly at the back end of last season and were really impressed so we told him to go away over the summer and work on a few things, which he did.

"I think he's lost more than a stone in the space of two months and he has a real desire to be a footballer.

"Hopefully we can continue to improve him. He is another one who we feel can get better the longer he is with us.

"He took a real punt coming to us because he was told his scholarship as a civil engineer would no longer be there for him if he came on trial with us for four or five weeks,.

"We spoke to his parents, who have been great, and thankfully it has paid off for him."

"I'm delighted to be here. I came in on trial initially but luckily the gaffer has taken a chance on me and hopefully I can replay him.

"I like to run in behind defenders, stretch teams and run the channels. We have a couple of targetmen so hopefully I can bring something a bit different.

"There is a good, experienced squad here and I think we have a good chance of going up.

"I have spoken to Shola [Ameobi], Jon [Stead] and Alan [Smith] because there is nobody better for me to learn from than them.

"The gaffer was a poacher too and I like to think of myself as one so hopefully I can pick up a few things from him."

"He plays off the shoulder, runs in behind and does all of the ugly stuff well, like closing down and running the channels.

"We are pleased to have him here. I have spoken to his dad, Dean, a lot and he said Callum just needs a chance.

"You know he will not go home and be told the wrong things. He will have good influences around him - his dad knows what it takes to be a professional.

"I don't think there are many better players for a young lad to learn from than Jon Stead and Shola Ameobi.

"Their influence can only be positive for him and he needs to make sure he gets his head down and works hard. He will get opportunities - it's about taking them now."