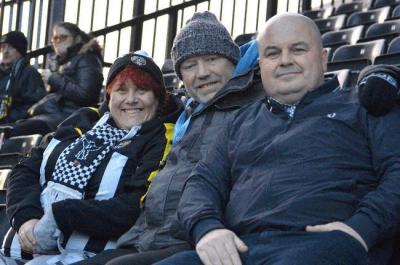 Notts County has kept their unbeaten run of nine games with a goalless draw at Meadow Lane against Dover Athletic in the National League.

The Magpies' had the first chance of the game and, came closet breaking the deadlock in the first half after Lee Worgan denied Enzio Boldewijn and Kyle Wootton with a double save to keep the terms level.

Michael Doyle managed to find Wes Thomas, who had an effort on goal but the Dover keeper Worgan was equal to it.

Dover then threatened Notts themselves, with their highest goal scorer Inih Effiong wasting their best chance after he cut inside the area but placed the ball way off target.

After 9 minutes of added time, neither team could break the deadlock and had to settle with a draw as the outcome.

Pride of Nottingham was at Meadow Lane for Notts County's draw against Dover Athletic. See if you've made it into our gallery on the latest Faces of PON!

Share your thoughts about this gallery on Pride of Nottingham by signing up to the website, visiting the forum and joining in the chat with hundreds of fellow Notts County fans.