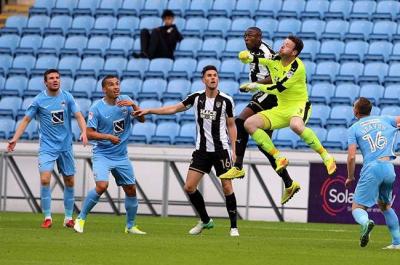 Despite Notts having started brightly, Coventry City took control of the game and ended the game claiming all three points in a comprehensive 3-0 win.

Adam Collin saved well at his near post early to deny Michael Doyle, but Notts found more time on the ball and enjoyed a lengthy spell as Terry Hawkride came close him self after hitting the post just seven minutes later.

Moments later, the Sky Blues found enough space in the Notts defence for Jodi Jones to slot his shot into the bottom corner.

In the second half Coventry continued to dominate, with only inspiration coming from Magpies substitute Jorge Grant.

However, it wasn't enough as Jodi Jones wrapped up the win with two goals as Notts were caught cheaply on the counter attack in the final 10 minutes.

Here are the match highlights from the official Notts site - see for yourselves how the Magpies got on.

Share your thoughts about the highlights on Pride of Nottingham by signing up to the website, visiting the forum and joining in the chat with hundreds of fellow Notts County fans.