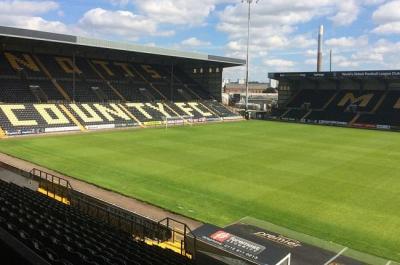 In a game of few genuine chances, the Magpies failed to muster a single shot on target against a Mariners side that defended well but likewise couldn't break down the hosts.

How did the gaffer, the players and the fans react to the result? Pride of Nottingham has compiled some of the post-match quotes.

"It was a fair result. We weren't our usual selves today.

"It's just one of those days. You're going to have them but we've not had too many here in the past year. We huffed and puffed a lot but our ability on the ball wasn't as up to scratch as it has been.

"We didn't create enough clear-cut chances or have enough sustained pressure so it was a job well done by Grimsby, as well as us not being at the top of our game."

"It keeps us on a run and they're a decent side. They've won their last three games and are one of the form sides in the league so it's not a bad point.

"They came here to frustrate us and made it hard for us. We've got to respect the point, which is something we didn't do last year.

"They had a couple of chances but I don't think they really threatened or put any sustained pressure on us. We weren't quite at it in the final third - it just didn't happen for us today.

"Hopefully we can pick up a win next weekend and it will all be fine."

Phil Wright: My first game of the season. And our first 0-0. We had a couple of chances. So did they. Fair result, but not a great performance.

Mick Jones: Frustrating game with both sides cancelling each other out and the ref doing his best to spoil it as well.

Jay Dalton: fair result really though if forte played first half things might have Been different but we march on coyp

Martyn Malone: Well that's 2 hours of my life I won't get back should be winning them games