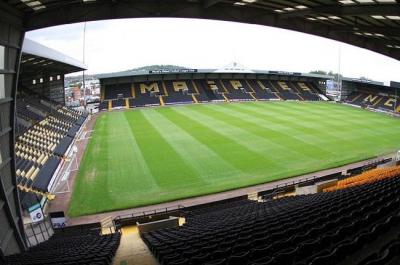 Notts County have fallen to a second League Two home defeat in a row after Crawley Town won 2-1 at Meadow Lane on Tuesday night.

Jimmy Smith scored in the 25th minute to give the Red Devils the lead but Jon Stead levelled from the penalty spot 13 minutes in the second half.

It looked as though the Magpies would claim a point but late drama saw Matty Virtue sent off before Ross Fitzsimons also saw red - and conceded a penalty - for kicking out at an opposition player.

Josh Payne went on to convert his stoppage-time spot kick for their first ever win at Meadow Lane and leave Notts at risk of slipping out of the automatic promotion places.

How did the Notts boss, players and fans react to the game's events? Here is a round-up of the post-match reaction.

Kevin Nolan on the result

"It's disappointing to lose the game but it's the first time we've lost successive games in the league this season, which shows how far we have come.

"It could have been a different game for us if we had put our chances away in the first 10-15 minutes. Over the last two games I think we have created more chances than I can remember here but not put them away.

"We've been hit with sucker punches and I have told the lads we need to manage the game in both ways and we haven't done that in the last two games as well as we have done in the past.

"To lose a goal from a throw-in, which was so basic from our point of view, is disappointing.

"I'm proud of these lads to be where they are at at this stage of the season. Nobody envisaged it. What I want the players to do is go back to what they were doing and be true to themselves - they'll be ok."

"Ross has been fantastic for me since he joined the club but he knows he has done wrong tonight.

"I'm not going to defend or condone what he did but what we will do is rally around him and ensure he learns from this.

"This is his first major run in a league team and he has been doing really well but tonight he has let a silly push rattle him and it has cost him a three-game suspension."

The Black and White Army

Chris: Well, that all went out the window. FA Cup seems a potential downer now, if we win Notts must re-focus! Otherwise the cup could be a distraction to the current mission, we didn't go top by being lucky. So, lets get things back to how they was and sign two players (ST/CB).

Kevin Hopcroft: We need to be realistic. Where we are in the league is still amazing. We are still second. We are still over achieving. Every team has a dip in form at some point. You cant win every game. I agree we need a new centre half as we are conceding too easy. We also need a young hungry forward who can feed off either stead or ameobi. But come on look where we have been for the last 4-5 years and get behind the team. Let us be the twelth man instead off slating the players, manager and whoever else. COYP!!!!!

David Skelding: If we want to win promotion we're going to need to find some composure from somewhere. What's the point in entering the pitch all hyped up if you're just going to gift a poor opposing team two ridiculously preventable goals and have two men sent off?

James Odell: We are just getting far too predictable and easy to play against. Meant to be 433 but its obviously 451 with stead left isolated. Huge gap between strikers and midfield, never around to picking up 2nd balls on the edge of the box. Squad has over achieved all season sadly getting found out now.

Share your thoughts about this post-match reaction piece on Pride of Nottingham by signing up to the website, visiting the forum and joining in the chat with hundreds of fellow Notts County fans.