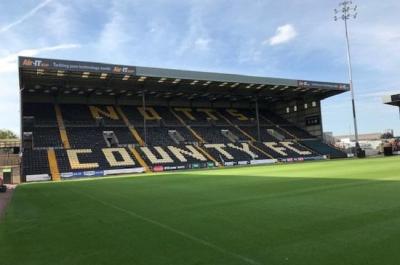 Notts County have got back on track in their League Two promotion tilt as Jorge Grant and Shola Ameobi scored to help secure a 2-0 win over Stevenage on Saturday.

A gritty encounter at Meadow Lane saw the deadlock broken in the 77th minute as Grant rifled a volley into the bottom corner after the visitors had struggled to deal with a ball into the box.

Ameobi then doubled the lead shortly afterwards when he bravely prodded in a header from Ben Hall to put the Magpies in control.

The goals were enough to seal an important win for the Magpies, who are still in the thick of the promotion race, just a point outside the top three.

How did the Notts contingent react to the win? Pride of Nottingham has compiled the key post-match reaction.

"The players have found a way to win the game today and that is a fantastic trait to have.

"It was never going to be smooth sailing and we have had performances where we have not hit the high notes of previous months.

"But we have to start building back towards that and today was a clear sign that everyone is in it together. I thought our little bits of quality shone through."

"That's our dream in the dressing room. The gaffer always asks for a clean sheet and three points. Everything clicked for us this afternoon, especially in the second half, and we came away deserved winners.

"Stevenage are a handy team so we showed them a bit of respect and they played well - but we handled it really well, like we have done for most of the season, and the clean sheet proves that.

"Teams at the top end of the league are going to drop points and we have had a bit of a sticky spell but confidence hasn't been knocked too much. We're a tight bunch in the dressing room and the gaffer looks after us."

Notts defended very little within the first half, we just pressed off Stevenage and a better team would have had a field day. I felt sorry for Collin for this reason, the amount of pressure being piled on and the amount of shots he saved it was a joke - he had no protection.

Yes, his distribution at times should have been quicker but every time he did it would only come back to him.

I do feel Ross Fitzsimons should now be given a go and if Ross does well, he should keep the starting place but if not - maybe some can be less harsher on him? Probably not but it seems unfair at times.

Jorge Grant made a difference, he didn't play great but he shown that little bit of class that changes games.

Once we scored we grew in confidence and we started to play better, I felt both teams overall performed very poorly and it wasn't the best match. Yet the result and three points are vital.

No it wasn't a great match but 3 points were very welcome, we need to up our performance against Mansfield though because they are in good form at the moment and will be up for it. I wish the fans wouldn't be so quick to get on Collin's back, I really don't think it will help his game to hear the criticism at the match.

I thought Jorge when he came on looked really back to something like his best, it seemed to give the whole team a lift.

We lacked pace, the defending was awful. The game was screaming out a 0-0 draw but the goal Grant scored completely changed the outcome.

More focus on creating chances and taking responsibility at the back is required. Good win mind.

Well done Notts; from a realistic fan who only gives out praise when warranted and also criticises when deserved, (otherwise labeled as a “moaner” or “doomster” by the ass-kissing (only praise allowed, critical and honest opinions banned) so called “fans”.

Similar to some matches of the first half of the season. Notts kept going and scored a vital goal which was the game changer. After that confidence returned to the team. Massive three points. COYPs.

Share your thoughts about this match reaction compilation on Pride of Nottingham by signing up to the website, visiting the forum and joining in the chat with hundreds of fellow Notts County fans.