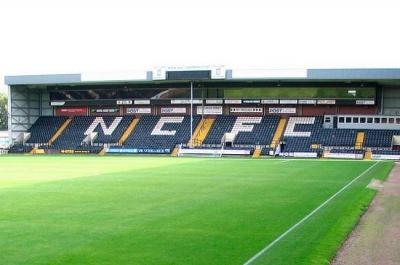 Notts County have moved back to the top of League Two thanks to a hard-fought 2-1 win over Barnet on Saturday.

Seven minutes into the second half, Matt Tootle beat his marker with a Cruyff turn and crossed for Ryan Yates, who glanced in his first league goal of the season.

Barnet, however, kept plugging away and set up a nervy finish when substitute Simeon Akinola rifled beyond Ross Fitzsimons - who came on for the injured Adam Collin - inside the far post with seven minutes remaining.

Here is what the Notts boss, some of the players and several fans had to say following the game.

"You have to ride your luck a bit. You only have to look at the results from around the league this afternoon to see how difficult it is.

"We dealt with Barnet superbly but we have a lot more to come. We have to remember where we've come from. We're still a team in transition.

"The lads have been superb and they have to keep believing in each other. What we're doing at the minute is remarkable and they deserve every pat on the back that's coming their way.

"To get this win is massive after the last couple of weeks. Hopefully we can build momentum with a few more. I have faith in these lads to get us the points we need.

"But we can't let them get carried away with that. They need to enjoy it, embrace it and try to get better so we can become a real force in this league."

"I'm delighted with the three points and my first league goal. Credit to Barnet - they are a good team and had spells in the game but I thought we dealt with it well. They moved the ball quite nicely at times but we were still in control. Luckily I took my chance today and we got the win."

The Notts players on social media

Scott Weatherbed: If Notts carry on playing how they are we should not only finish on 103 points but should be safe by 23rd December on 50 points!

Jay Dalton: Shaky first half bit lack lustre then second half stepped up a gear and maintained the pressure nervy defence last 5 min but credit to notts and we March on Nolan's super notts black white army.

David Burkey: Is there some needle between Collin and Fitzsimons ? I thought both did well but no handshakes between the two of them either when the change was made or at the end of the match?

Chris: It looked like we had picked up a solid 3 point victory, yet we invited Barnet to get back into the game. I'm not disappointed, but I think we need to be more clinical. Had the disallowed goal have stood, I don't think Barnet would have crept back into it. Credit goes to Fitzsimons because he was outstanding after Collin went off.