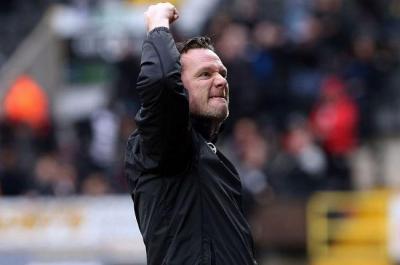 Notts County returned to winning ways in emphatic style thanks to a 3-0 win over Newport County in Saturday's Meadow Lane clash.

The visitors were reduced to 10 men in the 34th minute when Dan Butler was dismissed following an elbow on Matt Tootle.

The Magpies went on to take fell behind shortly afterwards when Jorge Grant slotted home from Jon Stead's pass.

Shola Ameobi then doubled the Magpies' advantage with a neat finish after 52 minutes, turning in a Grant cross.

The Nottingham Forest loanee went on to score his second of the match three minutes later when he nodded in the rebound from his own saved shot.

Grant sadly missed out on a hat-trick when his free kick rattled the woodwork, but Notts still saw out the game without a reply from Newport and, combined with Luton Town's defeat, went back to the top of League Two.

Here is the reaction from the Notts manager, several players, and the Black and White Army following the superb win over the Exiles.

“I was delighted with the performance and we were like our old selves again. It was what we were producing when we were at the top of the league the last time. It was high tempo and we dictated the play from start to finish.

“We really made it difficult for Newport and I was delighted with the goals we scored and the clean sheet too. It could have been five, six or seven given the chances we created and I don’t think that would have flattered them.

“Before the sending off there was a bit of anxiety, but I always felt we were in control but perhaps tried to force things a bit too much at times. But we started to settle and then the sending off came. But just because they have a man sent off it doesn’t give you an automatic right to win the game.

“You have to earn it. We did that and we made them pay the price for being down to 10 men.”

“I’m really happy. It’s been five games without a goal so it was good to get three points and a clean sheet.

“We came in with an attitude of ‘we’re not going to lose this game’ and maybe in the last few weeks we have let teams come on to us - but it was the opposite and it was proved in the final score.

“We were confident. We’ve been working on being calm and composed around the box in training and picking out the final pass. We could have had a lot more than three goals.

“It was a bit disappointing not to see the free-kick go in as that would have been a hat-trick and the first one of my career, but the win was all that mattered.”

Who r ya?? You Pies!!: Worthy winners in the end, after a game that needed something to get it on its way, got the incident with the sending off we didn't look back after that could have maybe won by more and played some good stuff to boot, COYP back top, indeed the only way is up!

Mark Connors: All you haters need to shut up about team selection and changes he makes for other competitions - KN KNOWS what he is doing in KN we trust - ironically we won today and Mansfield drew so who got it right Tuesday - I don't care if Mansfield win at Meadow Lane in the league as long as we go up YOU PIES!

Darren Handley: Great to be top of the pile again but some fans still don’t care if we can’t beat Mansfield really a local derby and your not bothered,are you really a Notts fan?

Pete Cowlishaw: Great result but seriously lads, you had 21 shots on target and only stuck 3 of them away, you need to get better at finishing lol