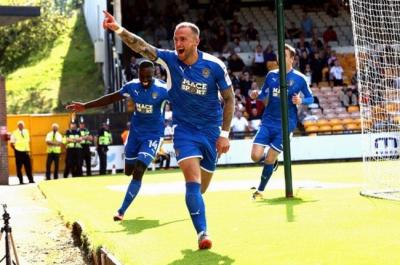 Notts County's season continues to go from strength to strength after a solid 1-0 win over Port Vale in Saturday's League Two fixture at Vale Park.

Lewis Alessandra came on as a substitute and scored with his first touch of the game in the second half to edge the visitors ahead.

The Valiants didn't offer much and, even with Shaun Brisley coming off injured and leaving the Magpies down to ten men having made all their substitutions, they still couldn't find a way back into the game.

County's victory means that they are unbeaten in five games in all competitions (and if you were to specify it as "in the 90 minutes", then we drew with Scunthorpe United too, technically speaking!) and, in League Two, sit an impressive fifth in the table, with 10 points from five games.

Here is some of the reaction from some of the Notts players, the manager, and the Black and White Army.

"It wasn't the greatest spectacle but when you go away, get a clean sheet and a win it's just fantastic. And then you hear all the fans singing at the end, not remembering much from the game but knowing they've won!

"Port Vale are under a bit of pressure so we knew they were going to come out all guns blazing and trying to put their stamp on the game. But I thought we rode that out well and didn't give them many opportunities.

"Thankfully, when the chance came our way, Lewis was on hand to put it in the back of the net. We're absolutely delighted."

“Victories like this mean a lot when you’ve had to really work for it, as you could see by the reaction from the lads at the end of the game.

“The big thing in this team is the togetherness. There are five or six captains which is really good for us, especially with the blend of youth in the team.

“The manager has built a team full of great lads. We’re a tight-knit group and we enjoy working for each other. The camaraderie in the group is fantastic and, with regards to strength in depth, this is the best League Two side I’ve played in.”

Brill result yesterday, its wins like this which will impact our final league position so i am delighted.

Good win but Port Vale could have easily got the victory themselves. In the first half they had a cracking chance which they wasted and the performance was not good enough. It was an awful game for both teams. Very scrappy.

Didn't get to see the match, but only needed to watch the highlights to see what an impact Dan Jones had on the game. Two moments of defensive brilliance. I know it is only one game, but personally I am very relieved with our start to the season as it doesn't feel like it is over before it has began for the first time in a while. Not getting too carried away, but just very thankful to finally see some more positivity around the players and the fans.

Very uninspiring performance but the players kept at it and got the win. Port Vale don't look like much of a side in league two but I just hope nobody gets carried away. If we win a few or lose one, people just get all OTT.

Port Vale wasn't really bad they just looked like a team without any real ideas. They could have taken the win for themselves after two early chances which Collin saved and then Jones running back when they was clear through. I am not all that bothered about the performance because the training ground will sort that. At this stage its just good to get the points!

Share your thoughts about the Port Vale match on Pride of Nottingham by signing up to the website, visiting the forum and joining in the chat with hundreds of fellow Notts County fans.