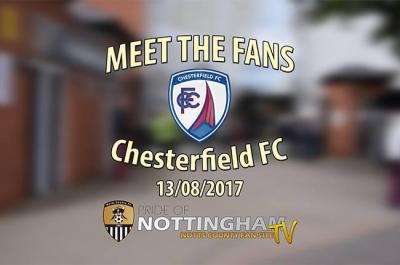 Notts County put their woeful 3-0 defeat at Coventry City last week firmly behind them as they claimed a solid 2-0 win against Chesterfield in their first home game of the 2017/18 League Two season.

Jorge Grant proved to be the star once again with an impressive brace consisting of a looped header followed by a stunning free kick in injury time.

Prior to the loanee's goals, it was a heated, controversial game, with Gary Caldwell's side playing dirty and going down to ten men, though it could so easily have been nine bearing in mind Gozie Ugwu's antics.

The result gives Kevin Nolan's side their first win of the new campaign following the loss at the Ricoh Arena in League Two and also in the League Cup at Scunthorpe United.

Pride of Nottingham spoke to a number of fans prior to the Spireites game, asking them a number of questions about the opening games of the campaign and their hopes for the game ahead.

Share your thoughts about this week's Meet the Fans video on Pride of Nottingham by signing up to the website, visiting the forum and joining in the chat with hundreds of fellow Notts County fans.