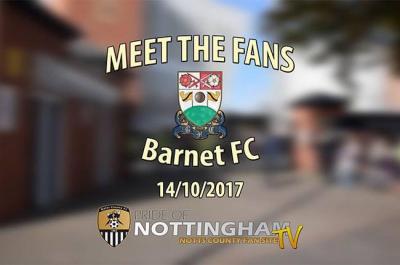 Notts County have moved back to the top of League Two thanks to a hard-fought 2-1 win over Barnet on Saturday.

Seven minutes into the second half, Matt Tootle beat his marker with a Cruyff turn and crossed for Ryan Yates, who glanced in his first league goal of the season.

Barnet, however, kept plugging away and set up a nervy finish when Simeon Akinola rifled beyond substitute keeper Ross Fitzsimons inside the far post with seven minutes remaining.

Notts managed to hold on to their goal advantage until the final whistle and the result sees them leapfrog Exeter City to return to the summit of the table.

Pride of Nottingham was at Meadow Lane for the game and interviewed a number of fans ahead of kickoff, asking them several questions including what they thought of Liam Noble's return to Notts County, the team's problem areas, and whether the Magpies have been overachieving at present.

Share your thoughts about this week's Meet the Fans on Pride of Nottingham by signing up to the website, visiting the forum and joining in the chat with hundreds of fellow Notts County fans.