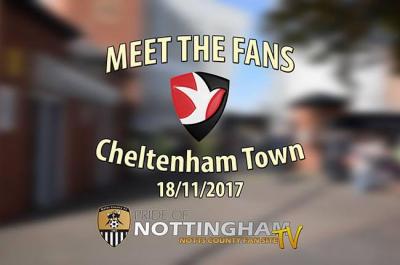 Notts County continue to set the pace at the top of the League Two table thanks to a 3-1 win over Cheltenham Town on Saturday.

Jorge Grant opened the scoring on the half-hour mark when Jon Stead's layoff was convincingly rifled home by the Nottingham Forest loanee.

However, the Robins restored parity against the run of play when Carl Winchester was allowed space to unleash a low shot goalwards that snuck beyond Ross Fitzsimons.

Kevin Nolan's side rode their luck early in the second half but eventually came good as Grant doubled his tally with a free kick.

Pride of Nottingham was at Meadow Lane for the game and interviewed several Magpies fans ahead of kickoff.

Questions asked include what the fans thought of the club having had the most managers over the last 20 years and Alan Shearer's comments regarding Kevin Nolan's future at the club.

Share your thoughts about this week's Meet the Fans on Pride of Nottingham by signing up to the website, visiting the forum and joining in the chat with hundreds of fellow Notts County fans.