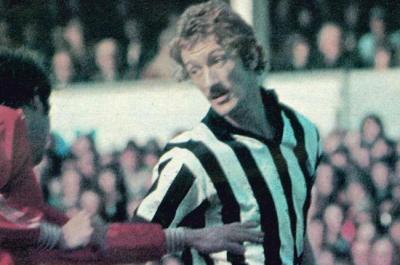 The opening of this memorial message has been constructed by Notts fan @Darryl Broughton, as fan messages came pouring in the news – first with the Notts County Supporters Club. It quickly became apparent how much the magpies’ star had touched the lives of many.

Mick Vinter joined Notts County in 1971/1972 season, he was a great player for the reserves, being the top scorer with 26 goals from that season.

He continued to be a regular striker for the reserves making the odd substitute appearance for the first team in the early days.

Eventually, he made a regular striking partnership in the first team with Les Bradd in season 1975/1976.

It was a joy and pleasure to have watched him play for Notts County.

Vinter was not quite as prolific the following term despite being the Magpies’ leading scorer with 12 goals in 41 outings, notably including a hat-trick in a 4-1 home win over Sheffield United.

In the summer of 1979 he was allowed to leave Notts when Wrexham made a transfer bid of £150,000 but he was never as successful as in his later years at Meadow Lane. After Wrexham he moved on to three other league clubs - Oxford United, Mansfield Town and Newport County.

The full article can be read over on the OS website - Here.

We at Pride of Nottingham would like to offer our sincere condolences to the family and friends of Mick Vinter, who has sadly passed away aged 65.