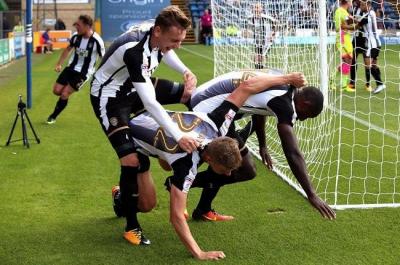 August is over and done with, Notts County's first month of the season is now just a memory, and we move on to September's fixtures with the Magpies nicely nestled in seventh place in League Two.

However, much like any other job where its employees are routinely recognised and rewarded, it's worth recognising the players who have impressed in the black and white in August.

Jorge Grant has already been named the player of the month by Notts County, the fans picking him head and shoulders over everyone else (64.8 percent compared to second-placed Terry Hawkridge with 20.1 percent).

But here at Pride of Nottingham we have decided to name the standout players for each position in August - so to all those picked, well done and keep up the good work going into September and for the rest of the season!

Here is PON's Team of the Month for August (Thank you to Jason Morphus for the graphic). Do you agree with our selection? #ThanksJason pic.twitter.com/HTY44JGxFf

Share your thoughts about our picks for team of the month on Pride of Nottingham by signing up to the website, visiting the forum and joining in the chat with hundreds of fellow Notts County fans.