'Poor for 80, decent for 10': ARLukomski on Northampton v Notts County 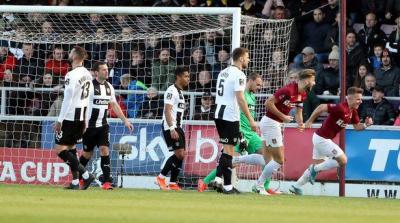 Notts County's FA Cup journey is over at the second round stage after Northampton Town claimed a 3-1 victory over Neal Ardley on Sunday.

The Cobblers where ahead after just three minutes when Scott Wharton ghosted in at the back post and headed home Nicky Adams' corner.

Regan Booty scuffed his shot wide from 12 yards for the Magpies, while Sam Slocombe denied Sam Hoskins at the other end, with the rebound hitting Ben Turner and coming back off a post.

Notts had chances to get back into the tie in the second half, but Enzio Boldewijn rippled the side-netting and Wes Thomas headed over with the goal gaping.

Harry Smith then wrapped up the win, nodding in another Hoskins cross after 76 minutes, with Kyle Dennis' late goal proving nothing more than a consolation.

ARLukomski was at the PTS Academy Stadium for the game - here are his thoughts.