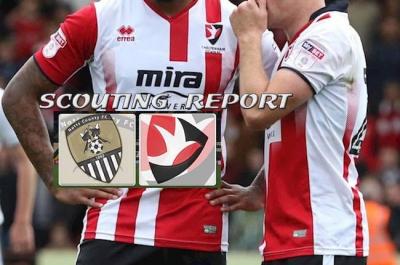 Here we are in mid-November and Notts County continue to hold top spot in League Two.

Up next for us is a home encounter with Cheltenham Town, who currently sit 16th in the table.

How are the Robins likely to line up? What tactics could they use? What's their style of play and how should Notts counter it?

Here is a thorough analysis by PON's Chris about the weekend's game and the opponents.

Notts County and Cheltenham Town have met just 10 times over the years.

The first meeting came in Division 2 on 28 September 2002 at Whaddon Road, and Notts comfortably won 4-1.

Notts are ahead in the head-to-head with 6 wins, 2 draws and 2 losses.

Harry Pell is the standout player for me, he’s a comfortable and confident player on the ball – who likes to make direct runs into space which allows the game to open up for Cheltenham Town. He also has a good eye for finishing and can be a treat from set pieces.

Upfront Mohamed Eisa also has an eye for goal, however he’s also very skilful on the ball and likes to take on runs when possible – he naturally draws defenders onto him and this generally doesn’t affect his game.

Jordan Cranston has been ruled out for the rest of the season with a hamstring and he will be missed by the Robins - he is pacey, likes to get on the ball as much as possible and influences the game positively with his passing ability.

Cheltenham Town tend to press their opposition which leads to some good displays, however they’re largely inconsistent in terms of their performance and often get punished due to individual mistakes.

On the ball they are confident and build nicely as a unit, they make use of numbers and aren’t afraid to commit players to their attacks.

However, this leaves them vulnerable at the back and due to their attacking style – this tends to invite play onto themselves.

Good teams often find plenty of space and opportunities to shot on goal, but in certain situations this can cancel out play leading to scrappy play.

There’s a good amount of pace within the Robins’ side and this certainly something which opposition teams can struggle against – whilst their attitude to never surrounding does mean that they can often make up for the individual mistakes which leads to them conceding.

The good football that they do express can result in them controlling the game, yet this is something which doesn’t happen as often as their manager Gary Johnson may like.

Notts will have to be physical to assert authority on the ball, whilst maintaining confidence under any direct pressure.

Our midfield will be key to unlocking chances, however I fully expect them to be required to help with defensive duties and as such it’s important we don’t over stretch ourselves.

Corners will be a useful tool for the Magpies’ and if we make use of the space which opens up from set plays, I can certainly see this as being a useful form of attack for Notts.

There’s no doubt Cheltenham are a decent outfit within League Two and as such, we shouldn’t underestimate them.

Share your thoughts about this Scouting Report article on Pride of Nottingham by signing up to the website, visiting the forum and joining in the chat with hundreds of fellow Notts County fans.