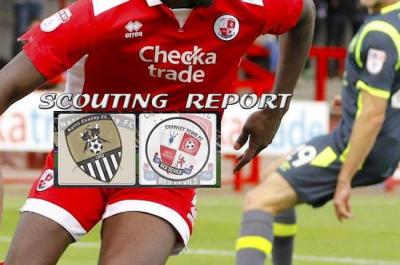 Notts County have the opportunity to put their 2-1 defeat to Exeter City behind them with tonight's League Two home game against Crawley Town.

How have the Red Devils been doing in the league? Who are their key players? And how are they expected to play?

Pride of Nottingham's Chris takes a look in our latest Scouting Report.

Notts County have played Crawley Town 11 times in their history.

The first fixture between the two was on 10 November 2012 at Meadow Lane, a League One meeting which finished 1-1.

Meanwhile the return fixture, played away on 9 March 2013, ended as a goalless draw.

The record stands at seven Notts wins, two Crawley wins, and two draws - all games took place either in League One or League Two.

Notts have won their last five games in a row agains Crawley, and seven of the last eight.

In midfield, Lewis Young is a versatile player who offers a lot of pace – the younger brother of Manchester United star Ashley Young will be a player which will be required to be marked tightly by the magpies defence.

Also, Jordan Roberts is a tall posing player who has added goals to his tally this season. The creative spark within Crawley’s midfield – he has the ability to switch from an out-wide area to convert nicely within the centre park.

Enzio Boldewijn is a threat up top and, on his day can really cause havoc in the oppositions defence.

Crawley Town are a physical but slow building team that focuses on creating chances from out wide, and hitting the opposition when space opens up.

They tend to sit back in an effort to absorb the pressure, this allows them to get a good feel for the game, and ultimately understand their counterparts better.

Due to this, the Red Devils can largely but put on the back foot from good play and as a direct result it puts them in danger – defensively they roll the dice a fair bit and rely on luck to survive conceding.

On the ball, they like ot press deep and use aerial balls as a way to cause havoc – where pace can exploit their opposition they do show no signs of fearing taking a team on, and if losing being a goal or two down doesn’t deter them either.

They’re a decent League Two team, who have the foundations to cause any side within this league problems.

However, due to their style of play and inconsistent performances – they do make it an uphill task for themselves not only to remain in competition for any points but also when creating their own chances on goal.

It’s clear that Notts will have to think more about how to hold the ball, whilst protecting their creative players.

Frustration will also be something that Notts will have to keep in check, so it’s important that little niggles don’t become a larger concern as the game progresses – as both sides will be naturally guilty of making silly mistakes.

I would like to see Notts use the flanks, as a way to gain ground but also switch to the centre of the park using timed overlaps as a way to directly cut in behind the opposition.

More chances should naturally fall for both teams, however if Notts focus more on the ground and use their feet well – this will unlock the Crawley Town defence in my opinion.

Set pieces and free kicks from an heading position may be an area whereby Notts could exploit.

However, they shouldn’t be scared to have a shot from distance.

Share your thoughts about this Scouting Report on Pride of Nottingham by signing up to the website, visiting the forum and joining in the chat with hundreds of fellow Notts County fans.