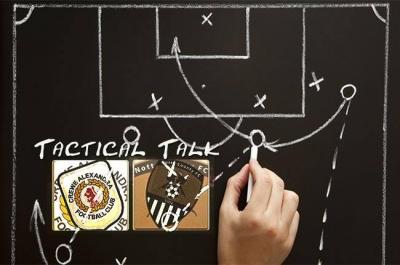 Notts County suffered a 2-0 defeat away at Crewe Alexandra on Tuesday night which knocked them off the top of League Two, with Luton Town taking their place.

Putting in one of the worst performances of the season so far, the Magpies fell behind just before half time when Michael Raynes rattled home from close range after Eddie Nolan had headed George Cooper’s free kick across goal.

Crewe's win was sealed when, 66 minutes in, Jordan Bowery ran in behind to latch onto a pass from Cooper - the Notts defence caught napping once again - and steer past goalkeeper Ross Fitzsimons.

Here is the analysis of the game from PON head honcho Chris.

No arguments. Notts simply didn’t turn up, which for the most part is the hardest thing because too many players had an off day and the whole game is probably a ‘write off’.

Not well at all, they struggled throughout the game and lacked application. Too many players had an off day, yet even after we had injected fresh legs it always seemed a little too late to change the outcome of the game.

How did Crewe play?

Quite well. I would say that they simply wanted it more than us, and you could tell by how they worked. For me Crewe were always capable of getting something from the game, but they played to our weaknesses and it showed on the pitch.

The line-up was interesting, but we lacked the grit. I have spoken about changes being required, yet against Crewe I honestly wouldn’t have changed much. I think the changes probably added to the nerves, yet there was little sign of any sort of in-game tactics and we struggled for this reason alone.

No complaints from me regarding any of the match officials, the better team simply won for the right reasons and the referee had little to do.

Carlisle United – a very offensive team that always seems to know how to play Notts. They enjoy controlling games via their midfield and play a flowing game, which always tends to see much better against us.

Revert back to basics yet again.

We missed Shaun Brisley who for me is our best defender on the pitch, he’s bright and alert to danger – so it’s important that he returns to the mix.

Notts need to learn how to control games via the centre of the park, for me the midfield has a lot of responsibility but they can avoid the pressure mounting on the defence by being more prepared to keep the ball on the ground.

It’s all about the passing at the end of the day, and our ability to work the ball – if we can spread it around and generally just get a feel for the game (without giving possession a way or attempting to force play) we should do well.

The strikers need to ensure that they can be brought into the game, yet for me it’s mostly about the midfield being prepared and the defence able to stomp out any inconsistencies.

Honestly, I would take a draw and I suspect it might be another hard game to watch but I have faith that we will be fine.

Gazan: To be honest, we were good but not fantastic. It was a hard won win. They hardly had a shot. Raynes's was immense. Nolan had another effective game, despite being whacked by a challenge that would have been a red card in the PL. Lowery and Grant worked very well together, the former replaced by a robust in the tackle Walker. Porter had a much better game and upset their defence. Bowery generally looked lost and could not make the right moves - that is until scored a fine goal from an exquisite George pass. He managed to wrap his foot around a high bouncing ball and managed to keep it down. Textbook technique. A good time had by all!

Ruocul: Have to disagree with gazan on two points. First on Bowery who worked his socks off and caused County`s defence no end of bother, plus a superb run to take the goal. Second point that Lowery and Grant worked well together. IMO Lowery is a loose cannon who works with no player. Most disruptive. We only saw how a midfield pair should work when Walker replaced Lowery on the hour. Grant and Walker played as central midfield players should. They protected our defence solidly. They efficiently supported the forwards at every opportunity. The attack for the second goal was started by Walker. We were a far better balanced side when Lowery went off. I really hope that the team continues with Grant and Walker in central midfield