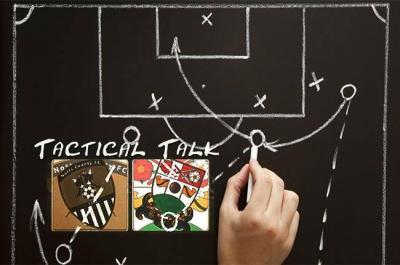 Notts County survived a late scare to move back to the top of League Two with a hard-fought 2-1 win over Barnet at Meadow Lane on Saturday.

The Magpies went ahead on the quarter-hour mark when Shola Ameobi headed a Rob Milsom corner towards goal and Shaun Brisley made sure of the goal from point-blank range.

Notts then doubled their advantage seven minutes into the second half when Matt Tootle Cruyff-turned his marker and crossed for Ryan Yates, who glanced home for his first league goal of the season.

Kevin Nolan's charges pressed for a third, Jorge Grant belting over from close range before Jon Stead fired the ball into the back of the net only to be thwarted by the offside flag.

The hosts then endured a nervy finish when Simeon Akinola drove inside the far post with seven minutes remaining, but were able to see the game out to leapfrog Exeter City up to top spot.

Pride of Nottingham chief and master tactician Chris has provided his review of the game from a tactical and analytical perspective, and also looks ahead to Tuesday night's trip to Crewe Alexandra.

It’s actually quite hard to answer. I think overall Notts did deserve to win but at the same time I think Barnet themselves played very well at times. A draw may be fairer, yet the first half and majority of the second for me firmly favoured Notts – yet Barnet did take the game to Notts once they scored but only because we allowed them.

First half was alright, nothing special but we deserved to be in the lead.

Both teams worked hard, and I was pleased with how Notts matched Barnet especially after the FGR game. Midfield seemed vastly different and it was pleasing to see the work rate increase within the second half. The Magpies dominated Barnet and really excelled within the second half, however the substitutes largely impacted the game and I feel it forced Notts to drop deeper to the point we started to struggle.

How did Barnet play?

Jamal Campbell-Ryce played very well, he was there key man and his outlet made it very difficult. However, going forward the whole Barnet squad did. I think their keeper was a massive weak link – he just seemed quite poor and created the issues within the Bees defence. They did very well to pull a goal back, at a time where they simply looked outmatched by Notts.

Yes, however at times they simply didn’t. First half I have absolutely no complaints, the starting line-up settled into the match very well and we looked quite lively at times (although Barnet were more dangerous). The game became more entertaining after the first 45 minutes, and the confidence grew but for me the substitutes happened at the wrong time forcing Notts to drop deeper.

He was fine, called the game quite fairly and it was his co-workers who at times massively spoiled the game but these days referees have to listen to all the match officials – so I don’t blame him for ruling out our third goal.

Crewe Alexandra – on paper they seem worse off than they have been in previous seasons but they have some very good young professionals and on their day they can take the game to anyone within League Two.

The key as always will be the way that we control the game, so the midfield will need to match the work rate that we saw against Barnet.

I honestly feel it time that we saw Shola Ameobi and Jonathan Forte up top, even Jon Stead's performance off the ball seemed quite empty and I honestly feel having a quicker option would highly benefit the game to the point we really can’t start without Ameobi.

Plus it seems unfair to see a largely consistent Forte forced back onto the bench, over someone who isn’t having the best season at all.

Defensively we need to keep on our toes, if Collin is out – we shouldn’t rely on Fitzsimons to do all the work at the back. He made some amazing saves, and I am confident he deserves to start (even if Collin is able to feature) but no keeper should be relied upon as we saw within the final 20 minutes.

Notts just have to ensure that they use the ball wisely, avoid rushing the play and really just keeping calm under possession.

Nicesirmick1: For the first 70 Mins this really was an awful game. We outpassed County (though did it mainly in our half of the pitch) but had no creativity in the final third. On todays showing I don't know how County are top. They hit the ball long and lack pace. We defended poorly for both their goals. With 20mins to go we seemed to realise that if we took the game to County they were there for the taking and but for one decent save by their keeper and the Santos miss at the end we could and should have got something from this game.

Becbee: No club can lose their best players and it not affect results. However the contrast between the first 70 and the last 20 minutes yesterday showed there's more to it than that. We were awful early on, it was only a matter of time before Notts County took the lead. At 1-0 it was more hope than expectation. At 2-0 down we were out of sight. The fact that we could respond in the way we eventually did just shows what we might have achieved had we played for 90 minutes. This isn't the first time this season and it's just so frustrating.

Mr Smart: County were a horrible team created in the image of their boss and his mentor Allardyce. Cynical, defensively well organised but horrible hoofball. Until we changed back to a wing back system they pressurised into mistakes and did their best to break up play and any momentum we got.

We were largely toothless as an attacking force with a midfield that was scared of running in behind JLAA, standing on top of each when we had possession and far too one paced. All our football was played in front of County.

One of the biggest differentiators was their deadball delivery which were superbly whipped in whilst we put in floaty nonsense. Then we switched to a back 3 and came alive. Tutonda was causing them all sorts of problems and put in some great crosses, one of which lead to the goal. Akinola/JLAA were 2v1 and Akinola couldn't pick out JLAA and then Santos missed a guilt edged chance right at the end.

All in all we were second best but although it's frustrating, we have several players starting today who wouldn't be anywhere near our first Xi yet we come away from a promotion chasing team having marginally lost.