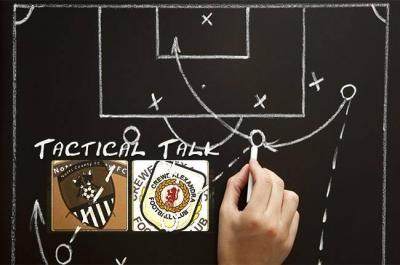 Notts County came from a goal down to record a superb 4-1 win over Crewe Alexandra in Saturday's League Two encounter at a packed Meadow Lane.

In front of a bumper crowd of more than 17,000 thanks to Alan Hardy's "2 for Crewe" offer, the Magpies fell behind to Shaun Miller's goal on the rebound.

However, Notts were level seven minutes later when Noor Husin rifled home in a stunning drive from all of 25 yards out.

Elliott Hewitt put the hosts ahead just before half time before adding a second on the hour, before Derby County loanee Mason Bennett scored on his debut to cap off a memorable win.

How did the game pan out from a tactical perspective? Pride of Nottingham's Chris takes a look with this weekend's Tactical Talk.

As I made my way to Meadow Lane yesterday, each time I encountered a fan that I know, they spoke about how confident they were about Notts hammering Crewe.

I really didn’t think this would be the case, yet on the pitch, Crewe’s opener of the game lifted Notts and it urged them on to better themselves.

The win was incredible for such a huge attendance and it was pleasing to see fans re-finding the buzz of winning ways.

We should have scored more when you think about it, so nobody can argue it wasn’t deserved.

The first 10 minutes we started very shaky, the Crewe goal had me thinking ‘here we go’ but I was proud of how Notts responded.

Our midfield took much of that burden and drove towards Crewe with sheer determination! It wasn’t a case of ‘will we score’ but ‘when’.

Ending the first half, Notts had played some very entertaining stuff at times and the 2-1 lead was vital.

It was what I would describe as a complete performance from the back to the front, as Collin looked great in goal and our attacking play looked lethal – we really did play with a lot of confidence.

How did Crewe play?

Exactly as I expected and had mentioned within my scouting report.

They used their physical side to attempt to intimidate Notts, whilst using scrappy play to get the edge over us at the beginning.

On the ball they played some good football and always seemed capable of giving us a game. However, at the back they were woeful and failed to cope with our play.

Overall, it wasn’t a ‘bad’ performance on their part – Notts were simply too good and refused to bow down to them, yet they played quite well in spells.

Absolutely! I would have liked to see Mason Bennett start. However, we got a glimpse of what he could do against a defence, which was as if a rabbit was caught in the headlights.

The formation, just common sense at this stage and it gives us much more time on the ball in midfield – it allows our players to get a good understand of how to play.

We attacked understanding what Crewe had about them and balanced our play according to that. Tactically Kevin Nolan was spot on and he adjusted well even when the game was completely in our hands.

He seemed to like the attendance more than perhaps the Notts board, I felt some of his decisions were quite poor and at times just baffling – yet he wasn’t noticeable once we had control of the game.

It could have easily been different on another day, yet a focused Notts squad took the niggles from his performance away.

Next up Barnet – Notts will have to put on a repeat performance as the last two games have really impressed us fans and it will be for The Bees’ to attempt to derail the progress that had been made on the pitch.

We should approach them with the same belief and, focus as we did against Crewe.

When Notts click on the field, there’s no denying how good or entertaining we can be and this match will be another perfect opportunity to build on from that had gone missing in the two home league defeats.

It’s vital that we go into the game fully focused, so no blunders to open with – as the Duffy mistake against Crewe could have changed the game completely.

Barnet will see our fixture against them as a way to prove themselves and quite possibly as a way to gain further momentum as they attempt to gain safety within League Two.

For this reason Notts will have to focus on playing a solid game at the back, and build on any chances when going forward – allow the midfield to control the game and carve open those chances we do have the ability to create.

I’d welcome seeing Mason Bennett start, we’ll know more about what type of options he will give us and I think Jon Stead has earned a break.

Ameobi and Bennett would be the right options for me in attack against Barnet. As the game slows down, it will naturally open up and this is when we can reintroduce players such as Stead.

It will be about remaining focus, and hopefully a good performance against Swansea City on Tuesday night might encourage our lads further – yet if we do bow out gracefully from the FA Cup, let’s not be downhearted.

We have a job to finish in League Two and, I have complete faith that we do have the ability to complete it.

Another week, another four goals conceded and another step towards non-league football. Is anything going to change? M x

Don’t care if it was only £2 those 1,500 should be refunded. 11 Conceded in the last 3 games all of which we were winning in. Weak mindset, deserve relegation #crewealex

The club is a bigger laughing stock that it was under Davis. Time to go Dave you have had enough chances.