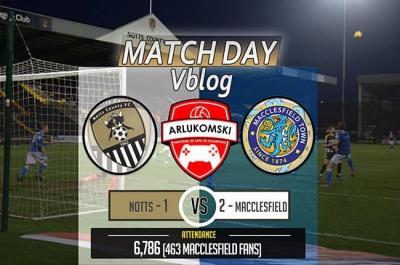 Well, it's finally got to that stage.

Notts County are bottom of the Football League.

Macclesfield Town, managed by one-time Magpie Sol Campbell, put in a display that overshadowed the hosts at Meadow Lane and claimed a 2-1 win which saw them leapfrog Notts off the foot of League Two.

Frankly, it's the same old story. An overall turgid display, the odd good moment following the equaliser where County looked as though they would go into the lead, only for shoddy defending to prove our downfall.

Scott Wilson rattled home the opener in the first hald, making the most of plenty of space to apply a good finish past Ross Fitzsimons.

Against the run of play, the second half brought a leveller for Neal Ardley's side when good hustling from Jon Stead lead to Keston Davies squaring for Kane Hemmings to drive home.

Although the Silkmen saw a man sent off late on, the numerical advantage was chalked off as Davies was then shown a straight red card for firing the ball into an opposition player's face while on the ground.

Long-suffering Notts fan ARLukomski, who's experienced far too much footballing misery for such a young man, continues to persevere with his superb vlogs - here's his latest entry.