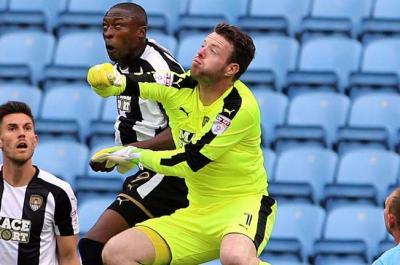 Adam Collin is pleased with having secured another clean sheet and three points in Saturday's 2-0 victory over Stevenage.

Notts County had to be patient in the League Two encounter at Meadow Lane, the first goal not coming until the 77th minute when substitute Jorge Grant rifled home.

Shola Ameobi then added a second minutes later and, combined with Collin's second shutout in three games, went on to get three crucial points in the race for promotion.

"That's our dream in the dressing room," the goalkeeper told the official Notts site.

"The gaffer always asks for a clean sheet and three points. Everything clicked for us, especially in the second half, and we came away deserved winners.

"Stevenage are a handy team so we showed them a bit of respect and they played well - but we handled it really well, like we have done for most of the season, and the clean sheet proves that.

"Teams at the top end of the league are going to drop points and we have had a bit of a sticky spell but confidence hasn't been knocked too much. We're a tight bunch in the dressing room and the gaffer looks after us."