Adam Collin: 'We are steadying the ship at Notts County' 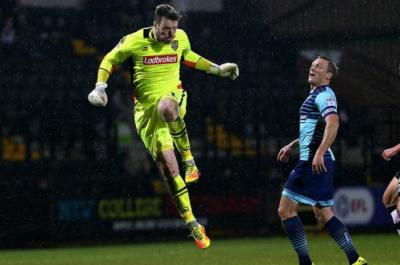 Notts County goalkeeper Adam Collin has admitted that the season has been tough so far, but believes that the Magpies are "steadying the ship" following Kevin Nolan's arrival.

The 32-year-old joined Notts in the summer following a career which began at Newcastle United and saw him turn out for the likes of Rotherham United, Carlisle United and non-league Workington AFC.

He told the Eastwood & Kimberley Advertiser: “The move to Notts County came about as soon as John Sheridan and Mark Crossley were appointed as the new management team.

“I was out of contract after a successful three years at Rotherham United and they got in touch asking if I would like to come in as No.1 goalkeeper.

“It’s been a very tough season so far. We started well and then all of a sudden the wheels fell off and we lost 10 games in a row.

“We were conceding too many goals and not scoring enough and now, with a change of manager, we look to be steadying the ship and getting back to looking a solid team.

“The new manager has come in and looked to make us harder to beat and more solid. We have good players we just needed a settled shape to the team and to be more organised.”

Collin also spoke about playing in the derby against Mansfield and keeping a clean sheet, as well as feeling pride at having youngsters from his academy in attendance.

He added: “The derby was a great game to play in. The atmosphere was fantastic and to get a clean sheet and to make a good save off the deflected shot was the highlight for me, plus to have quite a few of my young goalies from the academy there watching was a big bonus.”

The AC1 Goalkeeping Academy is based in Mansfield and currently has around 30 youngsters learning the ropes - for more information click here.

Share your thoughts about this story on Pride of Nottingham by signing up to the website, visiting the forum and joining the conversation.