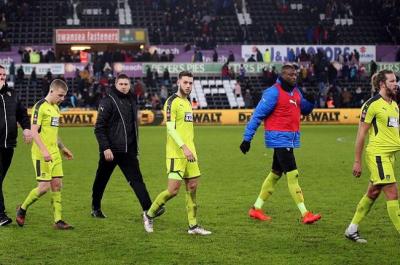 Alan Hardy has praised Notts County's fans for their "astonishingly good" support at Swansea City and stresses the need to focus on League Two beginning with today's game with Barnet.

The Magpies fans continued to sing even when their team was on the receiving end of a 8-1 defeat in Tuesday's FA Cup fourth-round replay at the Liberty Stadium.

Hardy admits the heavy loss left him struggling to sleep afterwards and says he felt sorry for the travelling fans, but is eager to move on and hopefully end the week with a win at the Hive Stadium.

"I didn’t sleep well afterwards as I didn’t doze off until 3am," the club owner wrote in his weekly Nottingham Post column. "I was reasonably philosophical but I just wanted to be on my own.

"I didn’t care about the money and I felt sorry for the fans because they were astonishingly good. They never stopped singing and the majority of them would have travelled back that night.

"It wasn’t a nice feeling knowing they had seen the team lose 8-1 but we move on and now our sole focus is the league, in which we have a massive game at Barnet this weekend.

"We are in an excellent position, although it is incredibly tight at the top.

"With six of the top eight playing each other this weekend, it represents a good chance to open up a slight gap on some of our rivals.

"Let’s hope we can end the week with a win as we chase our ultimate goal - to seal one of those automatic promotion places."