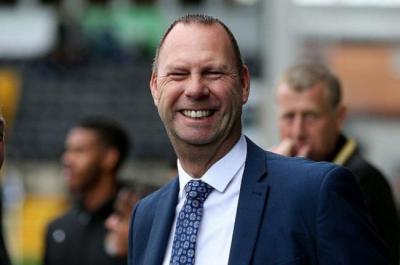 Alan Hardy is looking ahead to a grandstand finish to the season as he hopes for Notts County to claim a top-three spot in League Two.

The Magpies face Grimsby Town away on Saturday before wrapping up the regular programme at Meadow Lane against fellow high-flyers Luton Town.

Notts are currently fifth in the table but third-placed Wycombe Wanderers are just two points above Kevin Nolan's side, ensuring there is all to play for in the final two games of the season.

Hardy has previously stated that he would have loved seeing Notts seal promotion via the playoffs at Wembley on his birthday, but has now admitted he wants the automatic spot.

"Win at Grimsby this weekend and we’ll go into [the Luton] match with a chance of securing automatic promotion on the last day of the season," Hardy told the Nottingham Post. £What an occasion that would be.

"I’ve gone on record in the past as saying my dream would be to be promoted – on my birthday – via the playoffs at Wembley.

"But, now the top three is tantalisingly close, I’m starting to think an early present would be preferable!

"Automatic promotion would afford us an extra three weeks to prepare for a season in League One, which I’m sure would be a big jump for everyone in the business.

"That said, there is no pressure on the manager or the players from my point of view. They’ve done a tremendous job to get themselves into this position and what will be will be.

"But, if we can take it down to the final day, it promises to be a cracker of a finale."