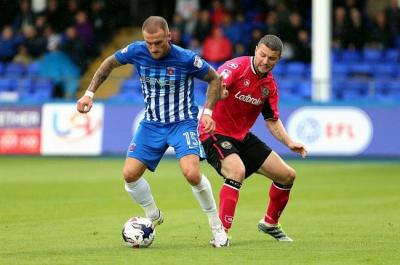 Alan Hardy says he is happy to pay transfer fees for Notts County's targets, so long as it's within reason and fits with the club's financial structure.

The Magpies owner funded the arrival of Lewis Alessandra on Friday when he agreed an undisclosed fee with Hartlepool United for the player.

Alessandra was the second signing to arrive at Meadow Lane, after Terry Hawkridge's arrival from National League champions Lincoln City.

"It is really important that we get the balance right between players that we pay fees for, those we sign on a free and those who will come on loan," he said.

"Even though our budget is bigger than what we originally said, we do have to watch how much we do pay.

"But I am sure that once Kevin Nolan (Magpies boss) returns from holiday, there will be one or two more players he fancies.

"If they command a fee, then as long as it fits in with the structure of the football club, and as we did with Lewis, then I am happy to support the manager.

"You have to make sure the deal makes sense and as Lewis proved, that was one that did, given his contribution to Hartlepool's team last season."