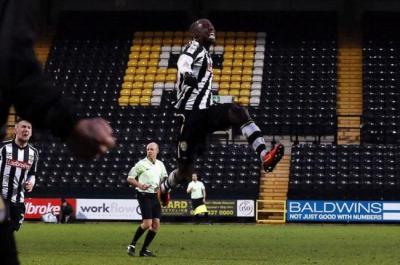 Alan Hardy has described Notts County's 2-1 home win over Crawley Town last season as the game which transformed the mindsets of the players and set the tone for the New Era.

Notts headed into the game on January 28 without a win in 13 league games, having lost 11 of them, and despite Hardy's takeover earlier that month, things still looked dire for the club.

In his final Nottingham Post column of 2017, Hardy wrote: "When I try to think of a defining game, I think of those that may not only have gone our way in terms of results, but also signalled a change in mentality and in doing so sparked a new era of belief.

"It would have been tempting to say the Mansfield game last January, considering we had gone into it on the back of 10 straight defeats.

"It was Kevin’s first match in charge too and we ground out a 0-0 draw which stopped the rot and was pretty significant to everybody at the club.

"But the game I believe really set us off on the start of this wonderful journey was actually the second home fixture of my tenure, against Crawley.

"We were down to 10 men after 70-odd minutes when Curtis Thompson was sent off, but then Thierry Audel put us one-up just a few minutes later.

"James Collins equalised late on and for all intents and purposes, it looked like we were heading for another draw.

"But in the 90th minute, Jonathan Forte conjured up a winner which led to all of us going completely mental in the directors’ box.

"We couldn’t believe it was our first home win in the league since September. It set the tone for the never-say-die mentality at this club. We always keep going to the very last. It transformed the mindset of the players."