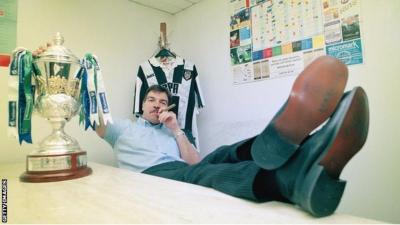 The FA are set to appoint former Notts boss Sam Allardyce as the new England manager today. He will be given a two-year contract.

Allardyce made a name for himself as a bruising centre half in the 70s and 80s, turning out for a host of clubs including Bolton and Preston. But the news will be of particular interest to Notts fans due to his spell in charge of the Magpies; Allardyce joined the club in early 1997 with the team in dire straits at the bottom of what is now League One. He was unable to turn our fortunes around in that first season, as Notts finished rock bottom. We bounced back the following season though, finishing as champions with 99 points and securing the championship in March. Allardyce left the club for Bolton in acrimonious circumstances in October 1999 amid rumours of a breakdown in the relationship between him and chairman Derek Pavis. Notts were third in League One at the time.

Allardyce has since become part of the furniture at the top level, managing 467 Premier League games. Although his trophy cabinet is relatively bare, he has become well-known as a good man manager. He will become the first former Notts manager to manage England on a permanent basis.