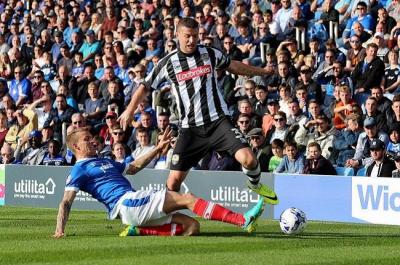 Carl Dickinson has defended Notts County's style of play and is adamant that winning promotion from League Two would be great for "shutting a few people up".

The Magpies have received criticism this season over how they play, which has seen plenty of moments in games where the ball is lumped up top.

Dickinson, however, thinks accusations of being a long-ball side are wide of the mark and says their play is "effective" as they aim to make it five games unbeaten at Chesterfield on Sunday.

“We know what we are good at, and we are never going to be the prettiest team on the eye,” the left-back told the Nottingham Post.

“People don't think we play good football, but we do at times and they don't realise that.

“They say Notts County are this long ball team, but it’s not. It’s effective football and I think maybe it (good football) goes a bit unnoticed but let them think that.

“We'll just keep plugging away and hopefully prove a lot of people wrong.

“It doesn’t bother the players because come the end of the season, if we do win promotion, then we can shut a few people up.

“We plan on taking that forward and trying to finish this season as strongly as possible.”