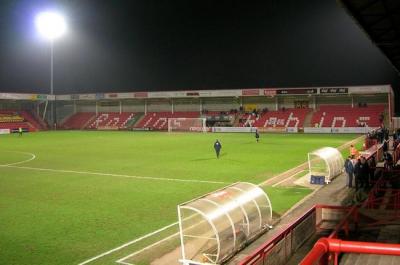 Cheltenham Town have put out a statement saying they are doing all they can to ensure Saturday's League Two game with Notts County goes ahead.

With snow and sub-zero weather causing postponements up and down the country, the Robins have had cover on at least some of the pitch since Friday before covering the whole playing surface up on Monday.

Temperatures are set to drop further in the week with more snow showers expected ahead of the Magpies' trip to the LCI Rail Stadium at the weekend, but the hosts are keeping both sets of fans in the loop.

Their statement read: “The pitch at the LCI Rail Stadium is completely covered as we continue to battle the wintry weather conditions and the ‘Beast from the East’ ahead of this weekend’s league fixture with Notts County.

“Parts of the playing surface were covered last Friday before the entire pitch was covered in frost sheets on Monday as we made every precaution ahead of the temperatures dropping later in the week.

“The club has received a large number of calls from supporters regarding the fixture. Supporters are advised to continue to check the club’s official media channels for the very latest later in the week. Stay warm and stay safe!”