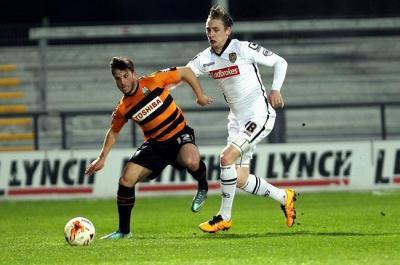 Notts County defender Elliott Hewitt has spoken favourably his centre-back partnership with Haydn Hollis, saying the trust between the two has been key to the team's recent clean sheets.

The Magpies shut out Yeovil Town in last week's goalless draw before claiming an impressive 1-0 win over Plymouth Argyle in midweek, two results which have helped the club edge further away from the League Two bottom two.

Richard Duffy is back from a two-match suspension this Saturday for the Stevenage trip but it is likely that Hewitt and Hollis will retain their starting XI berth following their fruitful partnership.

Speaking of Hollis, Hewitt told the Nottingham Post: "Haydn heads everything, he heads anything he can.

"We played together twice last season which was Crawley away and Luton away. We kept two clean sheets then too. It seems to be a good partnership we have together.

"He loves heading so I just know if he goes up for one, I can just tuck round. You've got to trust each other."

Share your thoughts about this news story on Pride of Nottingham by signing up to the website, visiting the forum and joining in the chat.