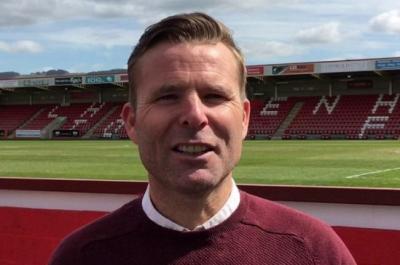 Former Cheltenham Town captain John Finnigan has made the astonishing claim that Notts County youth players would eat pieces of paper with their Nottingham Forest counterparts' names on them.

The 41-year-old made the claim in a column for Gloucestershire Live ahead of Tuesday night's rescheduled League Two clash between the Magpies and Cheltenham Town at Whaddon Road.

Finnigan, who came through the ranks at the City Ground, wrote: "Memories of living in Nottingham will come flooding back to me on Tuesday night when ex-Forest goalkeeper Mark Crossley arrives as part of manager Kevin Nolan's coaching staff at Notts County.

"'Big Norm' as everyone knew him is a great bloke and was a senior player who always had time for the younger lads and never forgot that he’d been one himself just a few short years earlier.

"He was a very good goalkeeper and a great character to have around the place too.

"My main memories of Notts County come from our youth team battles as a youngster.

"There was a fierce rivalry between the two clubs and it was drummed into us Forest lads early that the County lads would love to be in our shoes and were jealous and would want to beat us more than any other team.

"They did want to too, fortunately in my two years in the youth set up they never did.

"I don’t think our youth coach John Perkins who sadly passed away a year or so ago would have spoken to us for weeks had the Magpies from the other side of the Trent got one over on us.

"The Notts boys were always fired up, banging and kicking on our door and trying all the usual intimidation stuff before games.

"We were asked to sit quiet, told to listen to them and we all used to sit there smirking to one another thinking we’ll quiet them down when we cross the white line, when it means something.

"In later years some of the Notts boys confirmed their coach would slip them a piece of paper with their opposite number's name on it and they would eat them, stamp on them or whatever else they could think of to psych themselves up.

"I couldn’t believe it when I heard, I just broke down laughing. Great memories!"