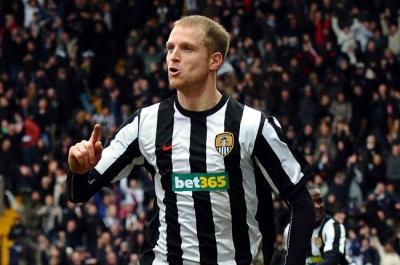 Former Notts County captain Neal Bishop has revealed how he was happy to just play "pub football" up until his mid-twenties but is glad to have taken the risk to go professional.

The 36-year-old has enjoyed a fruitful career in the Football League, playing for the likes of County, Blackpool and Scunthorpe United, where he remains today.

Bishop is loved by the Black and White Army for his four years of service at Meadow Lane, making close to 200 appearances between 2009 and 2013.

However, it could have been so different had he not decided to take the plunge and, given he was happy working a more conventional job, it may well have beem but for his "big decision".

“I didn’t play my first professional game until I was 24, 25," Bishop told Notts TV.

"When I was younger, I probably doubted myself a bit too much. I was at Middlesbrough academy when I was a kid and it didn’t work out – I don’t know whether I’d become a bit disillusioned or what.

"I was playing pub football at 22, 23; I would play on a Saturday, non-league, few quid cash in hand, then go out Saturday night – I’m a Middlesbrough lad, a Teeside lad and that’s how we do it.

"I would then play on a Sunday morning with my mates and go to the social club in the afternoon then work Monday morning!

"I used to be a window fitter and I was happy in that life, I was with a girl and it was a big decision to eventually go pro.

"I was not a kid anymore and went to Scarborough who were professional in the Conference at the time.

"It was a bit like, what do I do because I had a good job, picking up good money playing part time so it was a bit of a risk. But when I got into it I thought, if I’m going to give it a go I might as well go all in.

"It was a very unusual way to get into the game – you usually get the ones that come out the academies, who go out on loan and are then released.

"At 20, 21, they find out they aren’t good enough for their chosen clubs and filter down through the leagues whereas coming up through them is different.

"The ones who have been at the top like Jamie Vardy and Charlie Austin are such good stories and everyone knows about them because there are so few of them.

"Personally, I got to the Championship with Blackpool and don’t have the ability to play in the Premier League so I have ultimately made the most of my ability so late on.

"I made my debut in the Championship when I was 32 which is ridiculous and I think I appreciated it more because of the way I’d come through.

"Once you come up that way, and spend most of your life doing that, you don’t come away from it."