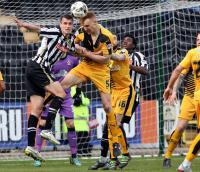 Notts County defender Haydn Hollis wants to use the last two games of the League Two season to restore some pride before they head into the summer break.

The Magpies will travel to Newport County this weekend before ending the campaign with a home clash against Carlisle United, who are managed by former Notts boss Keith Curle.

Defeat against Cambridge United last Saturday was their third loss in a week, following on from losses to Mansfield Town and Barnet, and with neither promotion nor relegation possible, there is very little to play for.

"We want to restore a little bit of pride," said Hollis.

"The gaffer said before Saturday's game that, with the profession we are in, there are great opportunities to rectify mistakes.

"But they are not easy games against Newport and Carlisle – there aren't any easy games at this level.

"Be it the top or the bottom, it's never straightforward and in Carlisle they've got Keith Curle, another ex-manager who is going to want to beat us."

Will Notts get more points on board before the season is over? Share your thoughts on Pride of Nottingham by signing up to the website, visiting the forum and joining the conversation.