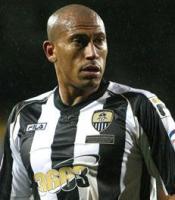 On loan Striker Chris Iwelumo is making his desire known about wanting to join Notts County on a permanent basis. He's spent the majority of his career playing above the 3rd tier of English football and would certainly add depth to our team, with his previous time at Colchester United being a prime example of what he brings to any team.

Despite finding it hard to establish himself in Gianfranco Zola's starting eleven, Iwelumo has been received fairly well by our supporters and this appears to be one of his reasons behind wanting to make the move permanent.

At 34 this might not be the signing for every fan but if Chris Iwelumo finds his feet early on, while the desire is fresh, this may become a very positive experience for the club. If the basis was to be on a short term deal, this would be even more beneficial with the extra clause of a possible extension earned on his performance similar to the deal originally offered to Gavin Mahon.

When interviewed by Nottingham Evening Post, Iwelumo responded "I would make the move permanent tomorrow." adding, "I'm happy here, there's a great bunch of lads, the gaffer is quality and the training facilities are a different class – I can't ask for any more. It makes a big difference being so close to home as well.”