Jorge Grant: 'I am happy to be at Notts County' 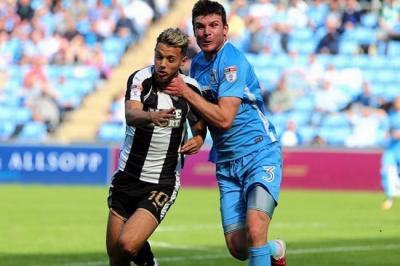 Jorge Grant has reiterated how much he is enjoying his time at Notts County after parent club Nottingham Forest confirmed they would not be recalling him in January.

The 23-year-old, who played a big part in the Magpies surviving in League Two last season, has picked up where he left off in 2017-18, his 14 goals so far helping the club to the upper spots in the table and to the third round of the FA Cup.

There had been concern over whether Grant's superb form would prompt Forest to recall him in January and make use of him to help the club up the Championship table, but manager Mark Warburton insisted he would not demand for him or Ryan Yates to return to the City Ground until the end of the season.

Grant told the Nottingham Post after the FA Cup second-round win over Oxford City that he was looking forward to remaining at the club, as well as giving his thoughts on the 3-2 win over the non-league side.

“I am just happy to be here,” he said. “I am relishing being on the pitch and I am enjoying my football.

“We showed our character in the end against Oxford. The boys are really together and we do things outside of football and on the training pitch. We work hard and we are all together as a team.

“From a personal perspective, the game was frustrating because we wanted to win and it wasn’t really going our way.

“Then during the game I was trying to concentrate on not missing the target from two yards.

“After there was just relief in that all of the hard work we put into the game both in the 90 minutes and the training pitch paid off.

“They (Oxford) were always going to give 100 percent no matter what. It was never going to be an easy test and I thought they handled themselves well.”