Jorge Grant: 'Season has gone better than expected but I can still improve' 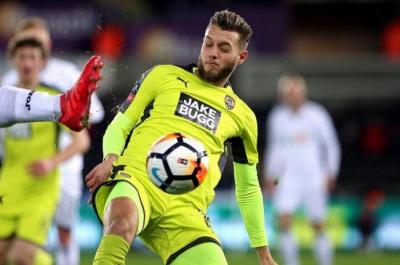 Jorge Grant has claimed that his season at Notts County has gone better than expected and insists he is close to reaching his individual targets.

The Magpies midfielder, on loan from Nottingham Forest, scored his 18th goal of the season last weekend as he came off the bench to help inspire a 2-0 win over Stevenage.

Grant scored 16 goals before Christmas but then experienced a barren run in front of goal which now seems to have been put to bed, but he still feels he can improve.

“It (the season) has gone better than I expected,” Grant told the Nottingham Post.

“I set myself targets and I’ve nearly reached both of them in terms of goals and assists.

“That’s a good thing when you set targets high and hit them.

“I still think I can improve. I’ve been inconsistent recently, but before that I was happy with my performances and they were up there most week.

“When the goals aren’t coming people think you have not played well, but I’ve had the odd game where I’ve played well and not scored.

“I’ve developed here massively. I am much more mature off the pitch as well as on it.”