Jorge Grant: 'Transfer speculation may have been at the back of my mind' 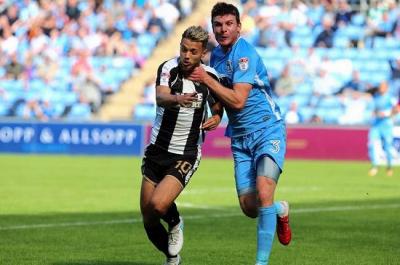 Jorge Grant has admitted that speculation over his future may have been at the back of his mind over the last few weeks.

The 23-year-old continues to impress for Notts County, taking his tally for the season to 16 with a brace in the 4-1 win at Morecambe on Boxing Day.

Prior to the two goals at the Globe Arena, Grant had not scored in the league since a two-goal haul against Cheltenham Town on November 11.

Grant's impact has been so significant at Meadow Lane that the rumour mill has gone into overdrive regarding whether he might return to parent club Nottingham Forest or get sold on.

Although Forest have stressed that the attacker is not being recalled in January, speculation continues to circulate about his immediate future.

“I haven’t been playing as well as I have done recently,” Grant told the Nottingham Post.

“The goals were not coming as frequently as they were before, maybe that’s been the stuff off the pitch I’m not too sure.

“I’ve been working just as hard and I’ve been concentrating on my football just as much but maybe in the back of your mind you do think about stuff like that.

“But the gaffer and I sat down this week and we got everything off our chests.

“I have that relationship with him where he says if you want to come and have a chat then you can do. He’s really good like that.”