Kevin Nolan: 'Adam Collin has been fantastic for Notts County' 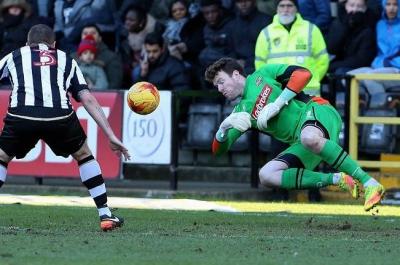 Kevin Nolan believes that Adam Collin has come in for too much criticism over his time at Notts County, admitting that he is "delighted" with the goalkeeper.

The 32-year-old joined the Magpies after leaving Rotherham United and has been first choice at Meadow Lane virtually ever since, though whether he should remain as such has been open to a lot of discussion among fans.

However, the Notts boss has praised his stopper, noting how he pulled off a save in injury time against Accrington Stanley to ensure a share of the spoils for the hosts in a 2-2 draw at Meadow Lane.

Nolan told the Nottingham Post: "We nearly lost the game after being so in control and playing so well. We’ve nearly had the fans going home saying ‘3-2, what a waste that was’.

“We’ve gifted two goals and we’ve relied on a moment of brilliance from our keeper again to get us a point.

“Adam has been fantastic since I came in in January. He’s a bit harshly treated sometimes I feel. He takes ownership and responsibility. He commands his area. I’m delighted with what he’s doing.”