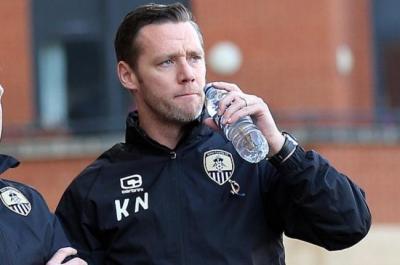 Kevin Nolan has earmarked Callum Saunders and Dean Hodge as two Notts Country trialists that he will take a closer look at in the coming weeks.

Speaking about Saunders and Hodge, Nolan told the Nottingham Post: "I've know Dean (Saunders) a while now and he's a good fella.

"Some of Callum's movement was really sharp in the game on Saturday. I thought he could have done better with his one on one, and I think he will be disappointed with himself too.

"Elliott did himself no harm at all either. We will have a closer look at them two in the coming week or so then we'll then take it from there."

Speaking about Bird, meanwhile, Duffy said: "Pierce has done really well. I was speaking to the gaffer and he told me what level he has come from.

"I was quite surprised because I hadn't realised the level of football he has been playing at.

"But to come in and settle like he has in a dressing room of big characters and big names is a credit to him.

"In the two games we've played he's done really well. But now we are playing against better class opposition we will see what he is made of."