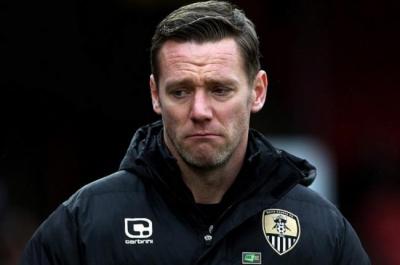 Kevin Nolan has asked Notts County fans to show "trust and patience" in him, his staff and Alan Hardy with regards to bringing players through the door.

So far, the Magpies have recruited Lewis Alessandra, Terry Hawkridge and Dan Jones, with a number of other player signings in the pipeline and several other rumours.

The relatively slow pace of progress in the transfer window has left some Notts fans disgruntled, especially with regards to nearby clubs like Mansfield Town who have been signing players willy-nilly.

However, Nolan is confident with what's going on behind the scenes, and is urging the Black and White faithful to keep the faith.

"We have had targets for a while now and we will stick to them," he told the official Notts site.

"There have been conversations between us and other clubs but we don't want to be in negotiations for too long and not getting the players in until the final weeks of pre-season.

"We want them to be able to withstand what our players have already been going through since they came back.

"Hopefully we will bring a few more in but I don't want to put a number on it. A lot of fans will be frustrated seeing other clubs sign a number of players but we are a club in transition.

"Looking back to where we were when Alan and I first came in, we are in a fantastic position and can hopefully build this club step-by-step.

"All I can do is ask for trust and patience in myself, my staff and Alan because we are working as hard as we can to get players through the door.

"We have to do our due diligence and make sure they are the right character and that they want to come here. They have to be able to contribute to the club and hit the ground running. We want to get them in as quickly as possible but it's not always the way in football. You have to be patient.

"You never know what will pop up later in the window so we don't want to do all of our work very early on. People can suddenly become available and you think 'We would have had him', so we are not blowing our budget. We have to be shrewd so that if those one or two players pop up - as they did in January - we can go and get them."