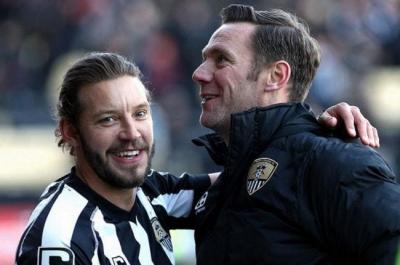 Kevin Nolan has backed Alan Smith to score even more goals for Notts County after opening his account for the club on Tuesday night.

The 36-year-old, who played as a striker early in his career, equalised for the Magpies in the EFL Trophy meeting with Mansfield Town, although the Stags went on to win 2-1 at Meadow Lane.

Despite the defeat, Nolan was full of praise for Smith and backed him to chip in with more goals, even if he acknowledges he's not going to be regularly playing full games.

“I thought Smudger was great and you are going to get that from him every time he plays,” Nolan told the Nottingham Post.

“He loves the game and still has that hunger, but unfortunately his legs don’t let him get to 90 minutes as much as he would like them to do.

“But he was brilliant and took his goal really well. That’s what you expect when you put him up there because he’s done it all his career.

“I’ve told him he will be a forward and I am expecting him to come up with a couple of goals here and there.”