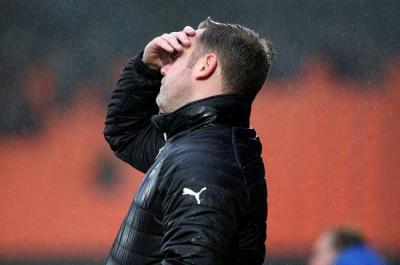 The Magpies boss was unhappy with an incident in the 17th minute when Jon Stead was brought down by goalkeeper Scott Flinders in the box, only for a penalty not to be given.

Stead went on to assist Terry Hawkridge for the game's opening goal shortly before the break, but the Robins equalised in the second half through Joe Morrell for a share of the spoils.

"I don’t want to talk about referees but I am going to have to after that,” Nolan told the Nottingham Post.

“He was an absolute shambles and I mean it. Everybody in the stadium knew it was a penalty and even their players ran past me and said ‘how did we get away with that’.

“If that decision goes for us we could got 1-0 up and they are down to 10 men after a short space of time.

“I am just so disappointed because they are the decisions you have to get right.

“But I was delighted with the first half, and in the second half they changed system and threw everything at us.

“I am delighted with the point, but I felt it should have been all three.”