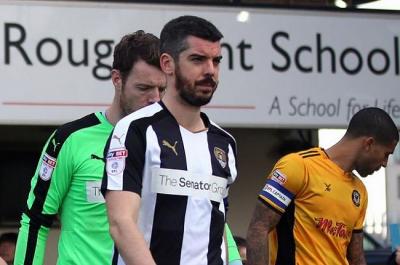 Kevin Nolan has revealed that Richard Duffy will be Notts County's captain in Saturday's League Two opener against Colchester United.

The defender held the armband for most of last season as Michael O'Connor was sidelined through a long-term injury.

Now that O'Connor has left, Nolan has stated that Duffy will continue as skipper "for the foreseeable future" but says it's not a permanent appointment.

“Richard Duffy will lead the team out on Saturday,” Nolan told the Nottingham Post. “I haven’t made my mind up who is going to be the club captain yet.

“Richard stepped in so well last year for Ocky (during Michael O’Connor’s injury) that he will continue to do it for the foreseeable future until I actually pinpoint one.

“It’s probably been the last thing I’ve been thinking of this week although people keep pushing me on it.

“I expect him to do the job that he’s done since I came into the club, he’s been absolutely fantastic doing that.”