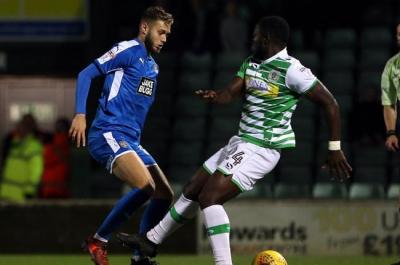 Kevin Nolan has thanked Nottingham Forest for confirming that Jorge Grant would remain at Notts County on loan until the end of the season.

The youngster spent the second half of last season at Notts and returned this term alongside Ryan Yates, the duo instrumental in the club's rise to the upper echelons of the League Two table.

Forest decided to recall Yates last week and ship him out on loan to Scunthorpe United, causing friction among the Notts fans plus anxiety regarding Grant's immediate future over the Trent.

However, owner Alan Hardy went on to confirm that Forest - new manager and all - will let Grant stay put until the end of the campaign and Nolan was pleased with the outcome.

“I am delighted to have Jorge here until the end of the season,” the Magpies boss told the Nottingham Post.

“With everything that happened with Ryan, we had that fear that Jorge would be going back to go to a number of clubs in League One.

“But Jorge said he wanted to stay and Forest were really happy for him to stay too.

“We thank Forest for helping us with Ryan at the beginning of the season and we wish him the best of luck going forward.

“And we thank Forest for allowing us to keep Jorge so we can continue helping him with his development so that he goes back a better player and he is closer to the first team.”