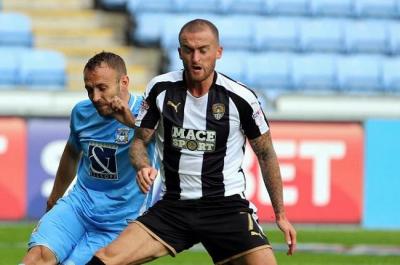 Kevin Nolan has spoken about Notts County duo Lewis Alessandra and Will Patching, praising the former and providing an update on the latter.

The 29-year-old attacker scored against Basford and Leicester City and is pushing for a start in the League Two opener against Colchester United.

Manchester City academy product Patching, meanwhile, made his debut for the Magpies at the weekend when he came on as a substitute in the 2-0 defeat at Luton Town.

“Lewi is just a quality player, a quality lad and a good kid,” Nolan told the Nottingham Post. “He is lovely to be around and is great on the training ground.

“The lads we have brought in have taken him to new levels which is good.”

As for Patching, he said: “It’s going to take him a while to get up to speed. He is way behind the lads, but he is training fully now with the boys.

“He got 15 to 20 minutes on Saturday and he will now be playing in a game on Tuesday to get his minutes up.

“But I think we will be seeing him in the League Cup game when we can get him extra minutes and get him in a proper competitive game.”